Frida Kahlo, Mexico City-born and arguably the most famous Mexican painter known for her progressive art and politics, used her paintings to explore questions of identity, gender, class, and race in Mexican society⁠—topics even more relatable today in the United States. Kahlo’s quote above ponders: “Feet for what do I want you, if I have wings to fly.” This post is written with the purpose of showing all the beautiful things Mexico has to offer, and to inspire Mexicans and Mexican-Americans to keep flying high despite the ignorance of others. With that in mind, let’s explore some of the reasons why Mexico City will always have part of my heart. 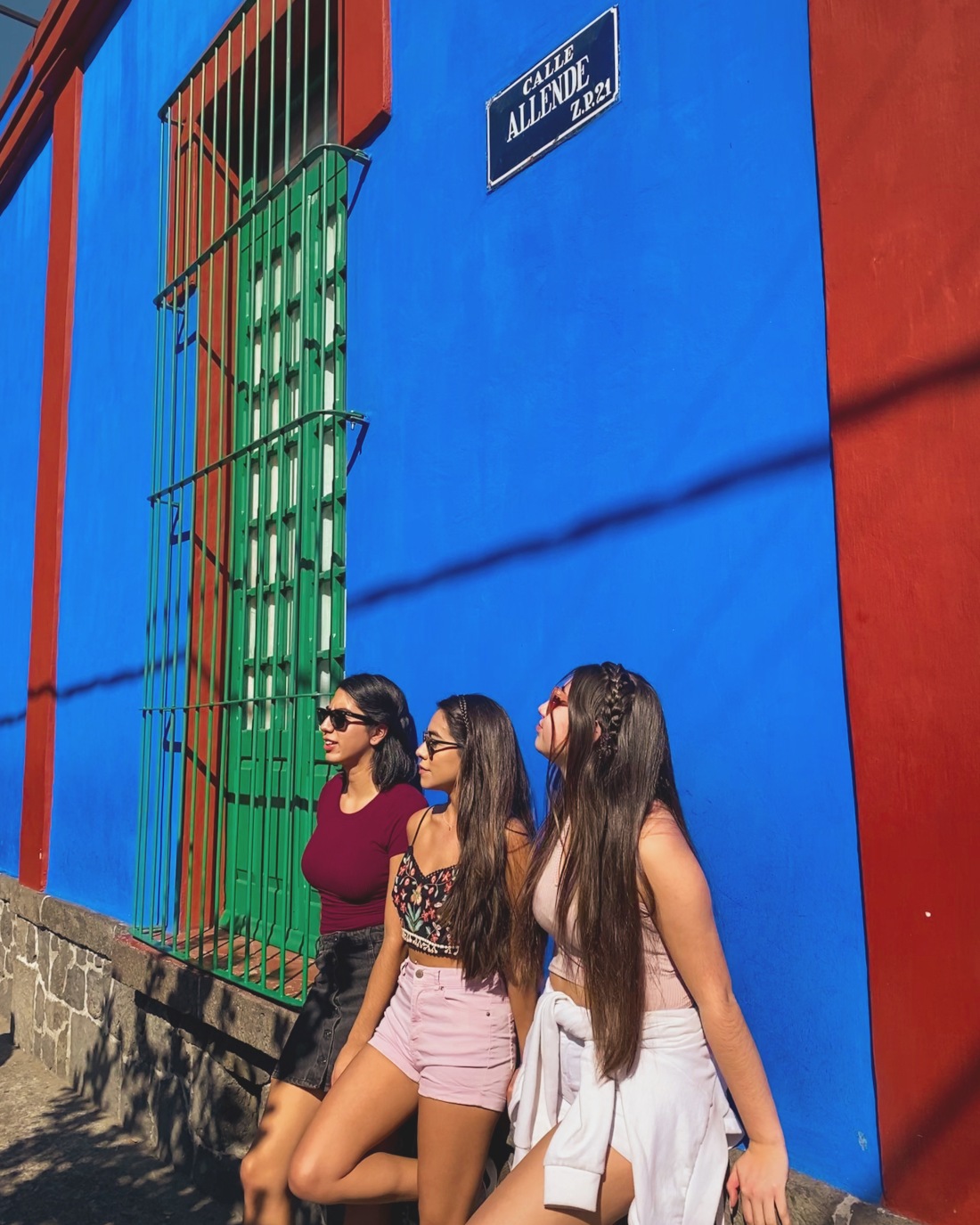 A Nahuatl word meaning “place of coyotes,” this unique borough is completely unlike any other in Mexico City (or the world, for that matter). If you’re a single lady looking to snag a hipster who’s medium to short-height, dark, and handsome you’ve come to the right place. Jokes aside, Coyoacán is the epicenter of Mexico City’s art and culture scene (and, notably, Frida Kahlo’s birthplace). The photo above was taken at La Casa Azul (The Blue House), Frida Kahlo’s family home and now world-renowned museum. Come to Coyoacán for architecture reminiscent of the Old World, coffee and desserts, local music, artisan crafts, books, and a slower pace.

Another Nahuatl word, Chapultepec means “grasshopper hill” and is one of the largest city parks in the Western Hemisphere (and Mexico City’s main lung, as most of the park is a forest that replenishes the city’s oxygen). Chapultepec is to Mexico City what Central Park is to NYC. The park’s main attractions are Castillo de Chapultepec (Chapultepec Castle), Zoológico de Chapultepec (Chapultepec Zoo), Museo de Antropología (Museum of Anthropology), and Museo Tamayo (Tamayo Museum of Contemporary Art). You can also rent pedal boats for a relaxing afternoon at the pond, and find all sorts of mouthwatering treats at the street vendor stands that line the brick walkways. 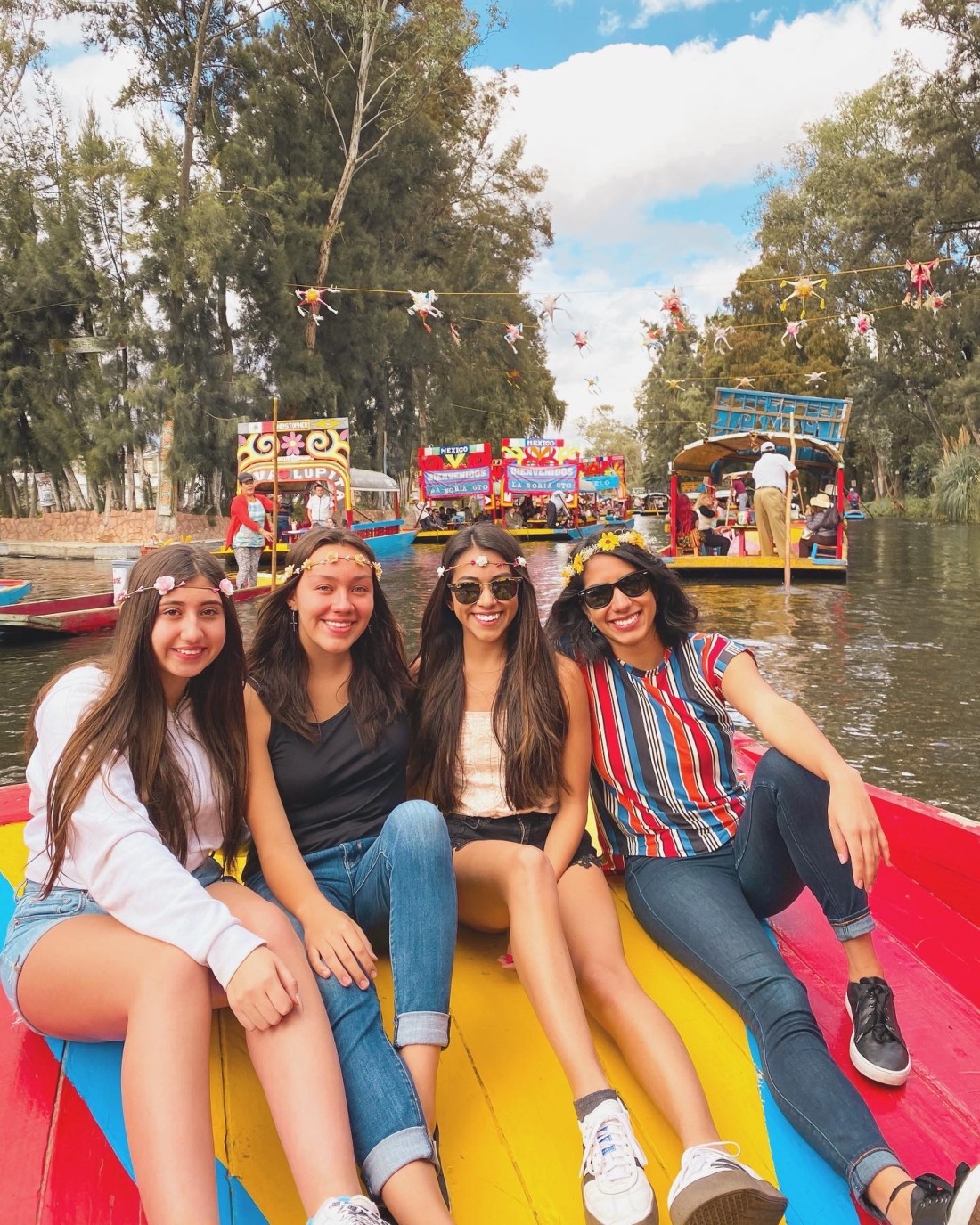 If you were hoping to visit Venice but ended up in Mexico City instead, you can make up for your disappointment (lol) by checking out the Xochimilco canals. Xochimilco means “where the flowers grow” in Nahuatl. A UNESCO World Heritage Site, it’s known for its system of canals and the gondolas (trajineras in Spanish) that allow you to cruise over them. Now, this is Mexico, though, not Italy. Replace the image in your mind of a gentle breeze wafting notes of romantic violin music toward you with that of mariachis, speakers blaring Latin pop, loud Spanish, and some of the best damn Micheladas you will ever have.

Where my James Bond fans at? One word for you: SPECTRE. Opening scene, 007 carries out his mission clad in full Calavera Catrín garb (Day of the Dead skeleton costume). That scene takes place at el Zócalo! Pre-colonial period, el Zócalo was the main ceremonial center of the Aztec city of Tenochtitlan (Zócalo means “plaza” in Nahuatl). Of course you have to see the historic city center when you visit (the plaza is full of beautiful architecture and is especially awe-inspiring at Christmastime decorated for the holidays), but I have to say I still feel sad seeing all the things the Spanish conquistadores built on top of the Aztec empire. My great-grandfather was a Spaniard and my great-grandmother was an Indigenous Mexican (my DNA is almost 50/50 Indigenous Mexican American and Spanish European), so I appreciate and identify with both the colonial and indigenous aspects of el Zócalo but can’t help siding with the native inhabitants of the land.

The name alone says it all—the Palace of Beautiful Arts. Come here to watch a folkloric ballet or simply to admire its majesty. Right across the street you’ll find la Torre Latinoamericana (the Latin American Tower), one of the tallest and most widely known skyscrapers in Mexico City. There’s a cafe with a balcony where you can enjoy delicious coffee and tarts while overlooking el Palacio de Bellas Artes. Also across the street is Sanborns Casa de los Azulejos (House of Tiles). Sanborns is a family-owned soda fountain-turned restaurant group serving mouthwatering Mexican food. Sanborns Casa de los Azulejos is especially lovely to visit as it is located in the 18th-century Baroque palace “House of Tiles,” which is covered top to bottom on three sides with exquisite, traditional ceramic tiles. Sanborns in Coyoacán is also very quaint and overlooks the plaza square. 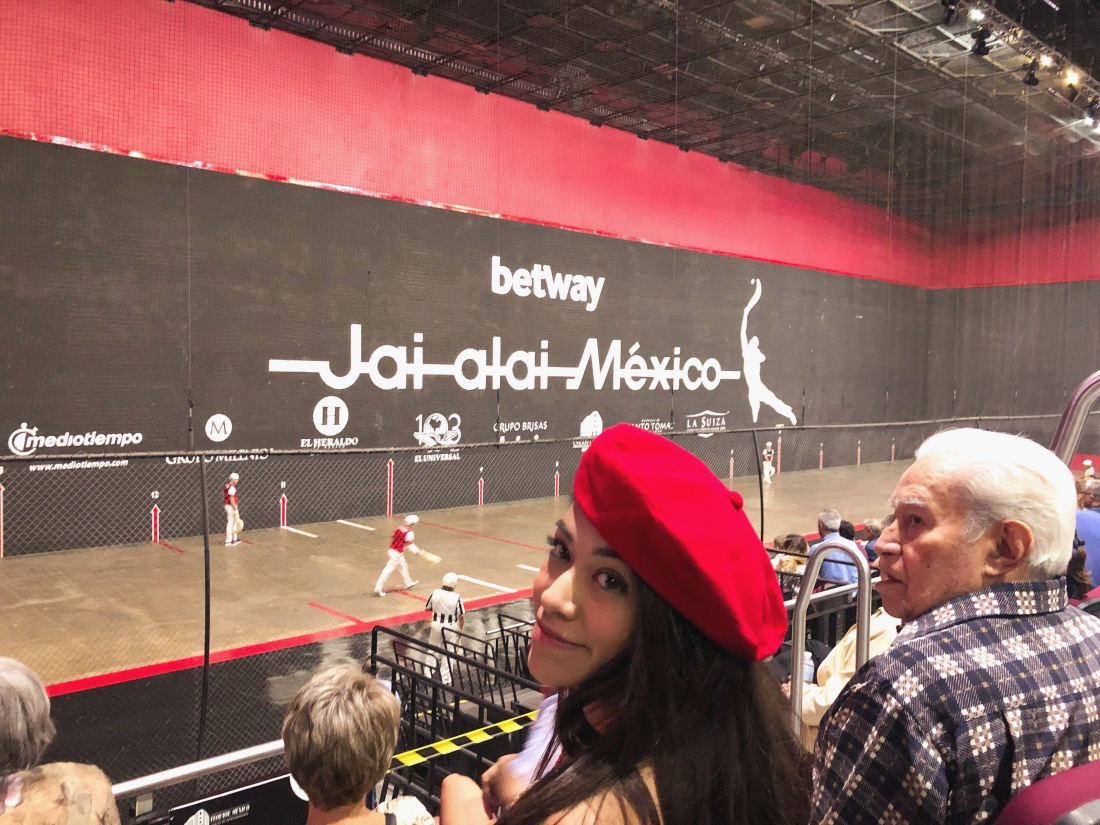 My grandfather is half Spanish so I grew up with a lot of Spanish traditions in my family. One of them is frontenis. The sport of frontenis can be described as tennis meets racquetball. It was developed in Mexico around the year 1900 and is accredited as a Basque pelota sport (any court sport played with a ball, hand, racket or basket against a wall and derived from norther Spain). My stepson, Evan, immediately took to the game and can’t get enough. While the first picture above was taken at our family’s frontón court, you’ll want to check out the main court (second image) at the historic Frontón México directly in front of Monumento a la Revolución (Monument to the Revolution). There you can catch an intense and unforgettable jai alai match—described only as racquetball meets lacrosse! Frontón México holds a special place in my heart as my abuelo worked there for over twenty years.

I put off going to the Museum of Anthropology for most of my life⁠—not really my vibe. When my husband finally made me go with him, I was surprised to find that I ended up being fascinated by it and not wanting to leave! I highly recommend it and, as I mentioned earlier, it’s located in beautiful Chapultepec so there’s plenty to see and do in that area before and after. 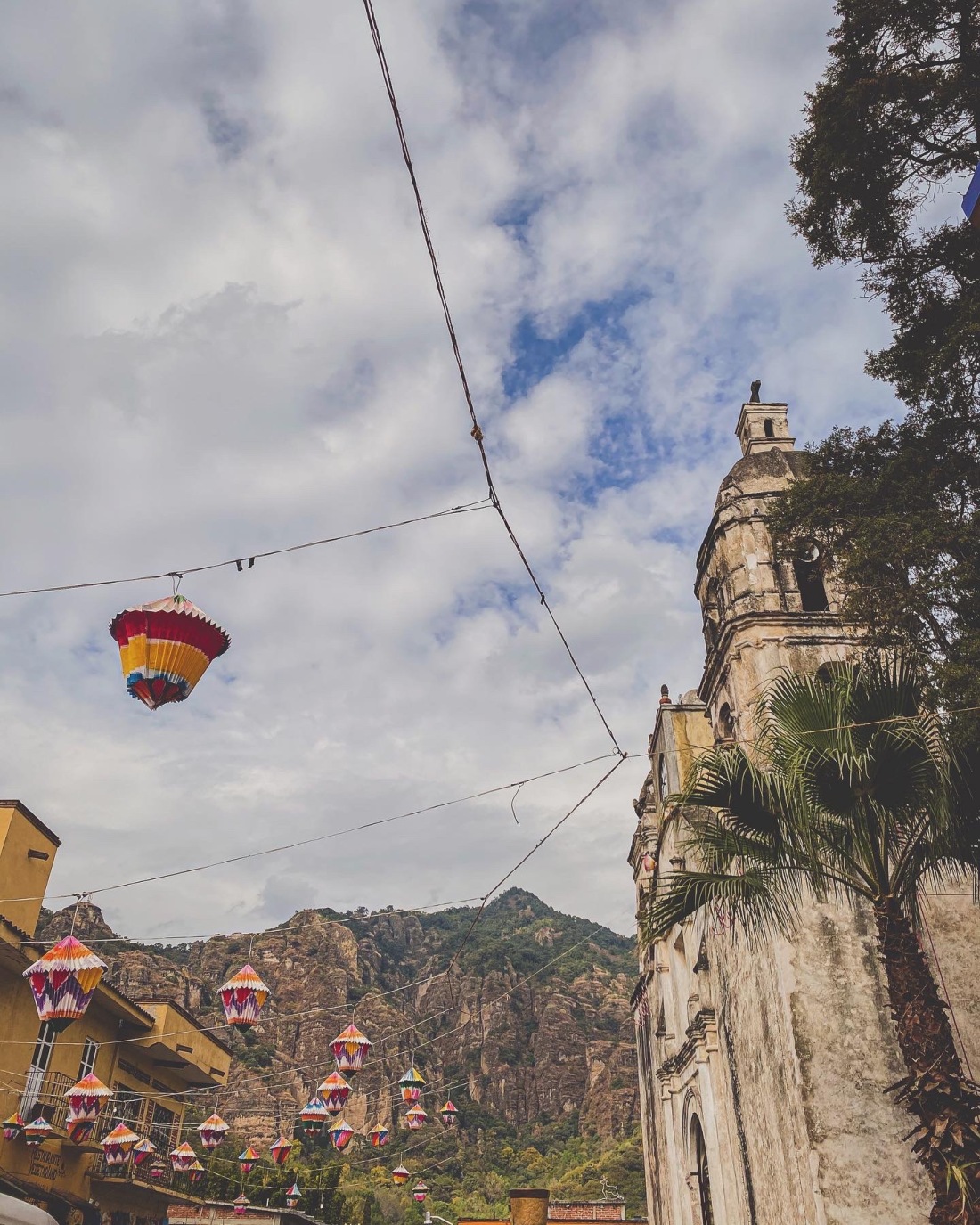 My crazy cousin bait-and-switched us on what ended up being one of the most incredible trips. DO NOT BE FOOLED—my cousin described the trip as “walking around the town and exploring a little hill” when, in reality, Sierra de Tepoztlán or Tepozteco Mountain is a very serious hike, easily a day long, significantly above sea level! We showed up in our little shorts and cute shoes, a couple Micheladas deep, to a very rude awakening. In the end, we were glad we did it. The village of Tepoztlán is the reputed birthplace of the famous Aztec god Quetzalcoatl and considered a “pueblo mágico” (magic town). The town itself was magical with endless music, traditional food, shops, and colorful ambiance. And the hike to Tepozteco, an archeological site at the top of the mountain, was looong but breathtaking and a lot of fun.

I’m definitely more chill than I am ritzy, but I gotta say Parque La Mexicana left an impression on me. If you’re wondering where the glamorous people of Mexico City go to walk their glamorous dogs with their glamorous kids in their glamorous clothes (with some non-glamorous wannabes like me mixed in), you’ve found the place. You can definitely tell when you’re in the borough of Santa Fe. Though a little too uppity for my personal taste, we still had fun longboarding around the park and throwing the ball around. Check it out for something different!

I know Mexico City gets a bad rap—it’s a crowded, dirty city with poor air quality and murders on every corner. And you know what, people who truly think that probably have something negative to say about every place they’ve been to. I personally live for getting out of my comfort zone and experiencing something different and, although I’m biased from a lifetime of wonderful memories there, don’t have to try in the least to see the beauty of Mexico City. Mexico as a whole is an amazing country filled with all kinds of cultural wonders, rich history, art and music, the most delicious food, and amazing, intelligent, and talented people. I’m proud of my heritage and truly believe the United States should feel fortunate to have us. As for you…if you haven’t visited Mexico (especially Mexico City), what are you waiting for?!