Havana had always been on my bucket list but, like many other travelers, I was intimidated by all the red tape keeping the country’s door shut to certain parts of the world. Traveling to Cuba is still prohibited for American tourists, but I wasn’t going to let that stop me. We managed to weasel our way in and live to tell the tale. Here are my tips on how to visit Cuba and not end up in prison…and what to do while you’re there! 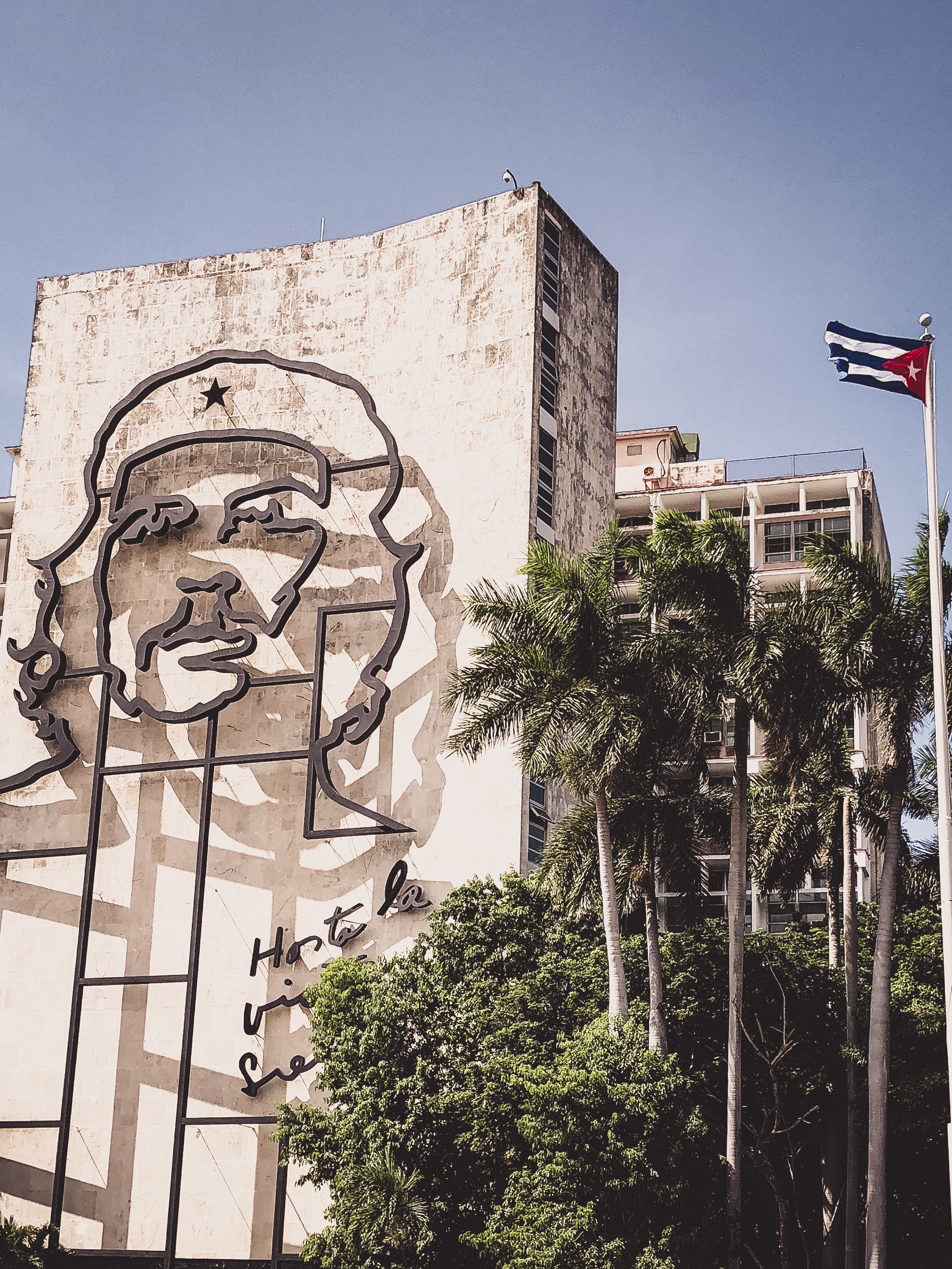 H I S T O R Y
Let’s start with a brief history lesson. I’ve always been fascinated by the rise and fall of this unique Caribbean country. The Republic of Cuba was colonized by Spain and still exhibits heavy Spanish influence (the city of Havana could be dropped smack in the middle of Madrid and nobody would notice). The United States actually helped Cuba gain its independence from Spain in the Spanish-American war of 1898. Despite the country’s attempt to strengthen its democratic system, the infamous Batista took over as dictator in 1952—causing the corruption, oppression, and outrage that fueled the revolution. On New Year’s Day 1959, Che Guevara and Fidel Castro led an army of revolutionists from the mountains of Cuba into Havana and overthrew Batista’s government (in one day!) in the name of justice and a better tomorrow. The road to hell being paved magnificently with good intentions, the Communist Party of Cuba was born in 1965. Factor in the Cold War, Cuban alliance with the Soviet Union, the threat of nuclear war during the Cuban Missile Crisis, and the American embargo, and it’ll come as no surprise to you that American tourism in Cuba was shut down.

T R A V E L  P O L I C Y
With all the turbulence surrounding Cuba, it is difficult to visit as an American. It’s worth noting that the rest of the world vacations there all the time—the rift is only between Cuba and the United States. I did a lot of research beforehand and learned that there are two main ways to get into Cuba as an American. One is going through another country that does not have any issues with Cuba (such as Mexico or Canada). The other is organizing your trip under the parameters of authorized travel (you can read about all the complicated details here).
I thought it best to not even mess with any regulations of the Office of Foreign Assets Control and decided to fly in through Mexico to play it safe. This worked exceptionally well—I bought our plane tickets online, purchased a Cuba tourist visa while in line to check in at the Cancun airport, and had no problems getting in once we landed in Havana. Remember, the Cuban government does not like the USA but they love collecting dollars, so the issue of traveling to Cuba is not with the Cubans but with the Americans. Yes, my passport did get stamped but I didn’t have any issues returning to the U.S. It looked like I was just coming back from a vacation in Mexico and I didn’t bother expanding my explanation.

S P E N D I N G  P O L I C Y
So, you made it into Cuba. Should be smooth sailing from here, right? Wrong. While in Cuba, there are many restrictions the American government places on U.S. citizens to prevent any support of Cuba’s communist government. Before you go anywhere, check the U.S.’ list of restricted Cuban entities. I was very careful where to spend money—not only because it was illegal for me as an American, but also because I’m no fan of communism and did not want to provide any support to Cuba’s corrupt system, only the Cuban people.
B U E N A  V I S T A  S O C I A L  C L U B
I grew up listening to the Buena Vista Social Club, so I literally cried when I attended one of their concerts in the place where it all began with some of the original members of the group! If you’ve never heard one of their songs, I’ll start you off with Chan Chan, one of their most classic hits. Dos Gardenias is also delightfully good. The Cuban revolution brought an end to many economies and industries as they were known, including the music industry. But music is foundational to what makes Cuba…well, Cuba. For a group of retired musicians on an isolated communist island to manage to reach the world with the music from their souls—that’s what makes the Buena Vista Social Club so special.

D A N C I N G
You can’t go to Cuba and not go dancing. The best place to go is Club Jardines del 1830. It’s a salsa club on the edge of the water where the locals go for great music and even better dancing. It was the most amazing time!

C L A S S I C  C A R S
Take a tour of Havana in one of the classic convertibles the city is known for. Make sure to wear a hat—to say Cuba is hot is a gross understatement and the sun will beat down on you while you ride like there is no tomorrow. Some tours will even include an outing to a bar for a refreshing mojito (and yes, they are as good as you’ve heard they are). 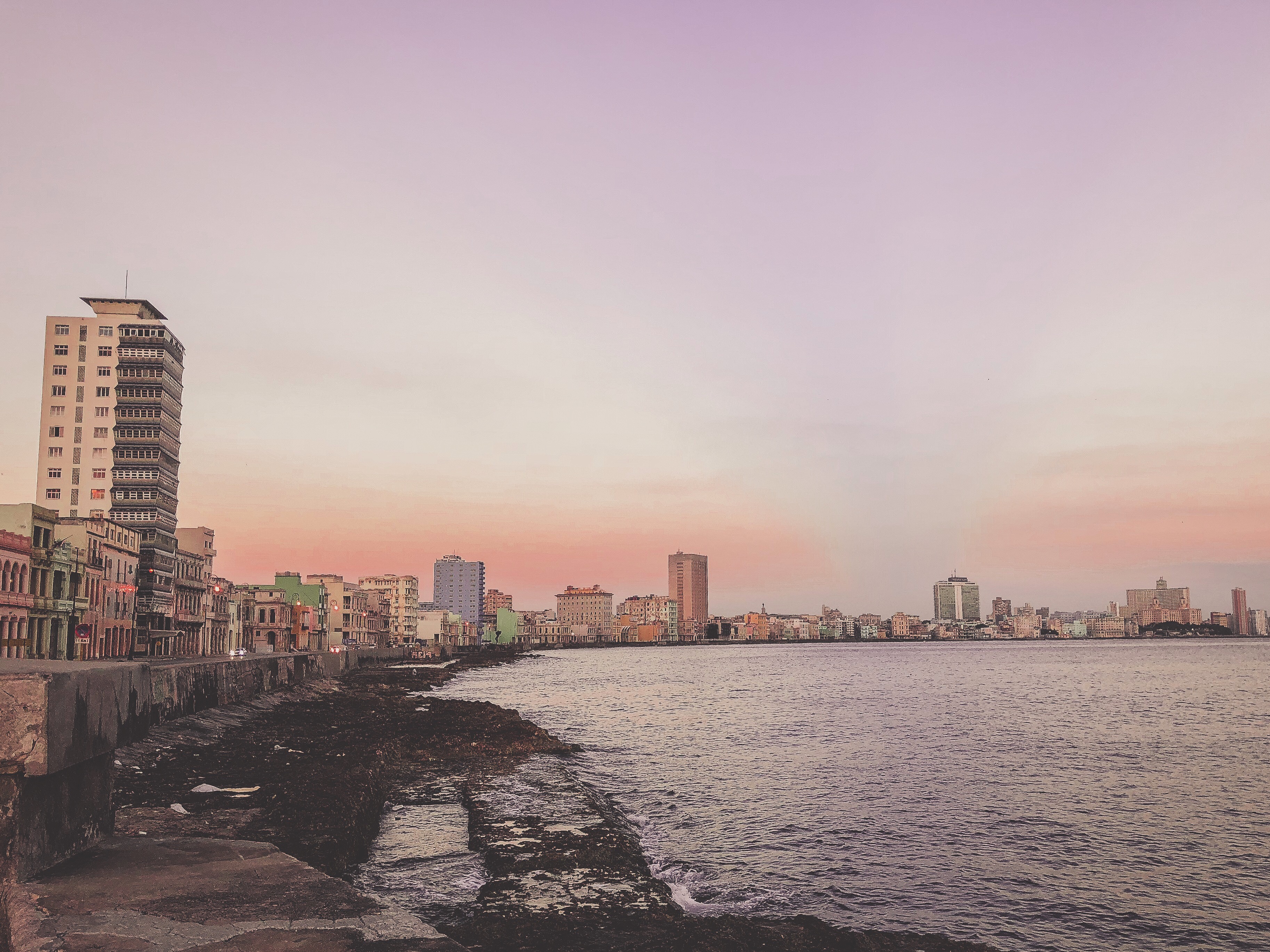 P R O M E N A D E S
If you want to do a little exploring on your own to take in the sights, colors, and sounds of Havana, the Malecón and Paseo del Prado are my picks. El Malecón is the walkway on the edge of the Straits of Florida, where the locals go to hang out, see the sunset, stargaze, and maybe dream of what lies beyond the water. El Paseo del Prado (also known as Paseo de Martí) is the main strip that connects everything in Havana. That’s a great place to stay (we got a room at Hotel Sevilla) to be within walking distance of all the museums and other attractions worth seeing.
C U B A N  C I G A R S
Yes, you can bring back Cuban cigars with you! According to the locals, Cohiba is the best brand and you should make sure the cigars are fresh (you’ll know if they are light and springy). We brought back one case, but from what I understand you can bring back up to two.

T H E  C U B A N  A F F A I R
If you want to learn more about Cuba and its history, I recommend reading The Cuban Affair by Nelson DeMille. It’s an exciting adventure read that will teach you a lot about Cuba without you even realizing.

Most of all, I hope you visit Havana one day and see for yourself all the unique things Cuba is known for.